Hibrewnation beer festival is back this month

Just when you think you've found your favorite craft beer, along comes Hibrewnation to set you back to a delicious square one.

Hibrewnation beer festival is back this month

(Left to right) Jeremy Vasquez of York and Meghan and Kyle Miller of Mount Joy raise their glasses and left hands while joining others in a pledge to drink only good beer during a past Hibrewnation.(Photo: Chris Dunn, FlipSidePA)

Just when you think you've found your favorite craft beer, along comes Hibrewnation to set you back to a delicious square one.

Hibrewnation is not your typical beer fest. The focus of Hibrewnation is tasting a wide variety of beers, many of which you've never seen before. With more than 80 craft beers available, Hibrewnation is offering beer connoisseurs the opportunity to find a rare beer to add to their roster of favorites.

Brewery to look for: Hibrewnation's featured brewery this year is Free Will Brewing Co., who will have several beers on tap throughout the day. They will have one of their rarest beers on tap during the second half of the VIP session.

New brew: This year, Hibrewnation and Manu-Forti Brewery have created an imperial milk stout called Postcard from Mackay. Only one barrel per event will be available.

Timed releases: Beer drinkers looking to make the most of their experience, and to plan their schedule around timed release beers, should pay close attention to their brochures. A schedule is included, with a warning that "we won't promise you will get them," so queue up early for the beers you are most interested in. Visitors should also be on the lookout for "secret stash" beers. A cryptic message at the bottom of the brochure warns, "We won't tell you where. We won't tell you what's in that cooler. It's all bonus beer." The brochure is also posted on Facebook under Uncle Traveling Matt's Brewing Expedition.

Matthew Davis is one of the masterminds behind Hibrewnation. "One day, I had this idea for a festival: Indoors, inside a Viking longhouse sort of thing, with a big fireplace, long tables and beer." Realizing they would have to build a longhouse in order to have one, the Hibrewnation team changed their focus. "Then it morphed into a straight-up beer festival."

What separates Hibrewnation from other beer fests is that Davis doesn't focus on what's trendy. He looks for beers that the majority of drinkers will enjoy, while also seeking out beers that relatively few people have had. "It could be a firkin, or an aged beer, or something," he explains. "Something you won't find at a bar as easily. Lastly, we sprinkle in some bottles on time release that we just can't get enough of. We'd rather share the bottles we did get, than squander them."

Talking to Davis gives you the impression that he's passionate about the taste of beer, not what it can do for you, which is why Hibrewnation is about tasting, and not about getting drunk. "A tasting festival tends toward a more mature audience, though it is not without it's own shenanigans. You have more people interested in what beers are there, who is pouring them, and generally exploring the offerings rather than just drinking them." Instead of trying to attract customers who are only interested in the highest ABV (alcohol by volume), Davis is trying to "build an event where the beer geeks are bringing their beer apprentices and letting them explore styles and depth of style that they simply won't find at many festivals because of shallow portfolios."

When asked which rare beer is his favorite, Davis quickly says, "The beer geek side of me would point out that the rarest beers I've had were firkin beers, since they only exist once. In that case, Yards made a firkin of their Pale Ale with fresh oranges for us once and it was amazing." However, he continues by saying, "But [Founders] CBS [Imperial Stout] takes the cake. Of all the hyped-up beers I've tried, CBS lived up to the hype. It's still the my number one."

When Davis says Hibrewnation offers rare beers, he means it. In fact, not every customer will have the opportunity to drink every beer. As Davis explains, "Some of [the beer] we only get a case of a year. I take those beers, fight my baser instinct to horde them, and serve them to a lucky few at each event. You may not always get them. But 20 or 40 people did, and that is more than would have without me doing that." His passion for sharing rare beers is clear, as he confides, "I like that part of it. Seeing people recognize the bottle and getting to finally try it." 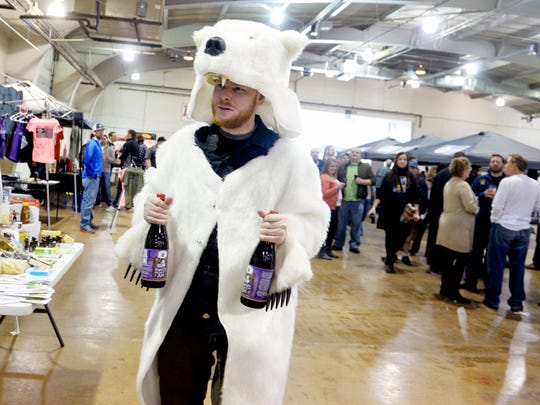