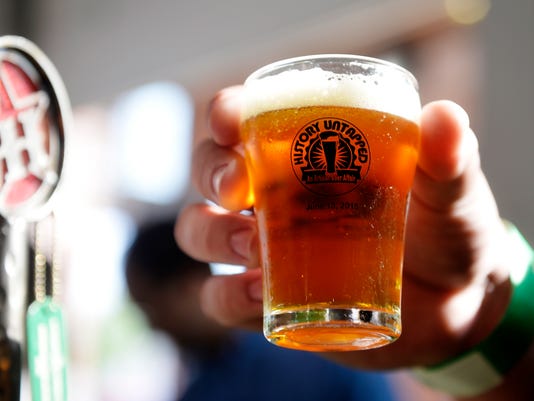 A sample glass of Liquid Hero's Irregardless IPA is shown at the York County Heritage Trust's History Untapped beer festival, which was held at the Agricultural & Industrial Museum on June 13. About 20 breweries were featured. The event was billed as a smaller, more intimate festival — with attendance capped at about 300 people.(Photo: Chris Dunn — Daily Record/Sunday News)

Two years ago, the Garlic Poet Restaurant & Bar’s executive chef approached Christian Quinlivan about partnering with Liquid Hero Brewery to put on an exclusive dinner, during which guests could talk to the people who made the meal. So he went “along with the ride.”

The event sold out. And Quinlivan, one of the co-owners of Liquid Hero Brewery, across from PeoplesBank Park in York, said that the experience went over well with customers.

“It’s kind of like an interactive dinner,” Quinlivan said. “It’s a lot of question and answer — and it’s a fun time.”

The next Chef’s Table Beer Dinner with Liquid Hero Brewery will be held on Jan. 23 at the Garlic Poet Restaurant & Bar, on Sheraton Drive near Limekiln Road in Fairview Township.The dinner features four courses, which the restaurant's executive chef, Kurt Wewer, will pair with four different beers from the brewery. The menu has not been finalized.

The beer dinners, Wewer said, focus on the relationship between the brewer and chef. During the events, both explain each course, and people are able to ask them questions.

The Garlic Poet Restaurant & Bar started the series in 2013, and tends to work with local breweries almost exclusively, he said.

To date, the restaurant has partnered with at least 10 different businesses, including Tröegs Independent Brewing, Intangible Ales and Yards Brewing Co. When he started the series, breweries were “quite fond” of the idea, Wewer said, and word spread quickly.

“And every time,” Wewer said, “they were all about it.”

He’s a homebrewer, and basically comes up with the pairings based on what he thinks will taste good. Typically, though, the beers will go from the least to most hoppy — because, he said, the ingredient destroys the palette.

Wewer said he tries to keep each to 40 people or fewer. Most beer dinners, he said, aren't that intimate — and  they might only feature a sales representative from the brewery.

“If you’re into amazing food and you enjoy craft beer,” he said, “you’re going to get to hang out with the people who created the things.”

How much: $60 (tickets purchased in advance).