Brewery tours are fun and educational, because touring a brewery is the best way to get to know your favorite beer.

Brewery tours are fun and educational, because touring a brewery is the best way to get to know your favorite beer.

Here, we rank ten of the best brewery tours for day trips.

The Stoudts Brewing Company is the quintessential craft brewery, as owner Ed Stoudt will tell you. According to Stoudt, his brewery will never produce more than 10,000 barrels of beer per year, because that would require adding too much water and adjuncts, like corn, to keep up production.

Surprisingly, Stoudt, himself, leads the brewery tours. In 1987, he founded the brewery, and its adjacent restaurant, with his wife, Carol. The tour isn't much of a tour, because the brewery is small. But Stoudt makes up for the lack of pageantry with his informative monologue, and his interesting personality. Stoudt is happy to answer any and all questions about not only his beer, but beer in general. Stoudt's explanation of his brewing process includes ingredients, temperatures and a lesson in microbiology. However, be prepared for salty language when it comes to discussing large beer manufacturers and light beer.

Samples aren't provided, but the price of single bottles in the restaurant are so low, you feel like you're taking advantage of Stoudt.

Bube's Brewery is fascinating because of its history and its location. Founder Alois Bube chose the Mount Joy location because of the existing caves. Those caves were expanded into what is now known as the Catacombs, where your tour takes place.

The Bube's Brewery tour is unique in that it features most of the brewery's original equipment. The building hasn't changed much since Bube bought it in 1876. The costumed tour guides are informative and friendly, so feel free to ask plenty of questions about the brewery's history and their brewing process. However, the tour is very brief.

Bube's produces very small batches of beer, but their selection changes frequently. There were no samples on the tour, but the bar and Biergarten (beer garden restaurant) are close by. 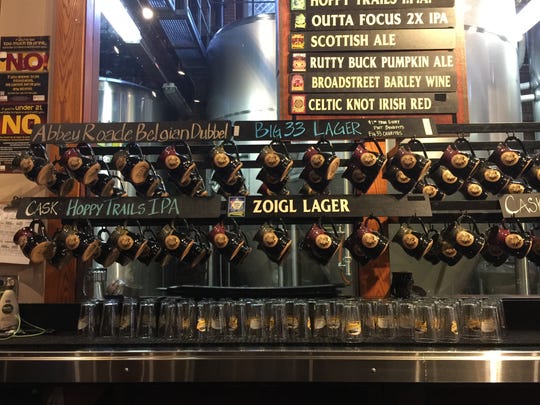 The Appalachian Brewing Co.  in Harrisburg, which opened in 1997, resides just outside the downtown area. The brick factory building is nondescript among other brick buildings. Once you're inside, however, you're greeted by unique features, like the high ceiling with its old wooden beams, and the enormous, glossy, wood bar.

The Appalachian tour is different from other brewery tours, in that you find out how they brew not only their beer, but also their craft sodas. There's plenty to see as you weave in and out of the tall, stainless steel vats. The bottling line is, perhaps, the most fascinating, as you watch six-packs being assembled.

Brewery tours are free, and include a small sample. Be sure to have a drink at the bar or stay for a delicious burger, before you head out the door.

Tours are offered every Saturday at 1 p.m. at 50 N. Cameron St., Harrisburg. There is plenty of parking behind the building. 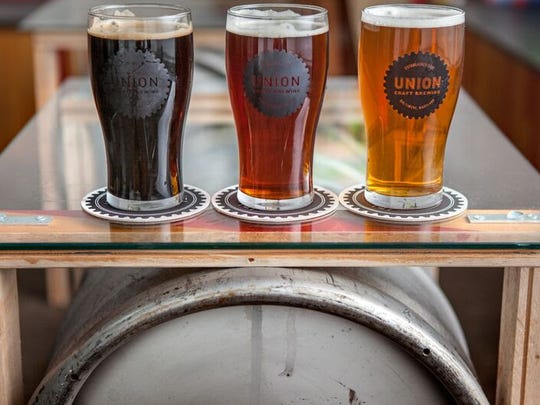 The atmosphere at Union Craft Brewing is similar to a neighborhood block party. When you visit Union Craft for a tour, there's usually a food truck, if not a food festival, outside in the parking lot.

The brewery tour isn't overly long, but its entertaining and informative. The tour encompasses the small brewery that resides in a very old, brick building that's part of the historic Woodberry neighborhood of Baltimore. If you have time, head across the street to Clipper Mill, which is a restored mill that's been repurposed into living spaces, offices, restaurants and shops.

You can choose from a variety of samples at the end of the tour. Its delicious range of beers belies the fact that Union Craft has only been brewing beer since 2012. Union Craft's flagship beer, Duckpin Pale Ale, is refreshing and very drinkable.

Park on the street or pay for parking at Clipper Mill. The parking lot is small and fills up quickly, especially on tour days. 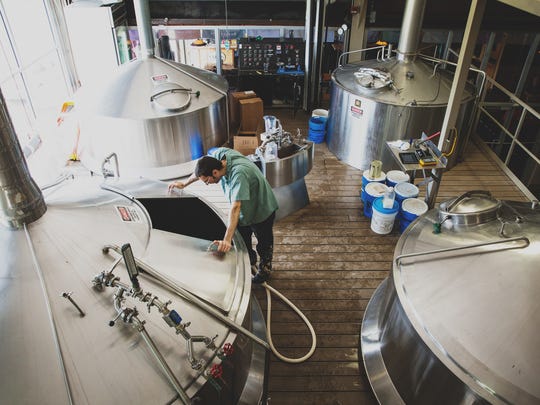 The Yards Brewing Co. brewery tour is fun for two reasons. First, the tour guides know their stuff, and they love to joke around. Second, the samples are plentiful and free.

Yards, which is located on the edge of Philadelphia, is a large facility, but still manages to make a delicious craft beer. Where other breweries, like Yuengling and Victory, are German-inspired, Yards' beer has roots in England. Along with their signature ales, Yards brews seasonal releases and small batches at their Philadelphia facility.

One caveat is that their Tasting Room Bar kitchen is only open Monday through Friday. However, food trucks are parked outside the facility every Saturday and Sunday.

Brewery tours are offered Saturdays and Sundays from 12 p.m. to 4 p.m. at 901 N. Delaware Ave., Philadelphia. 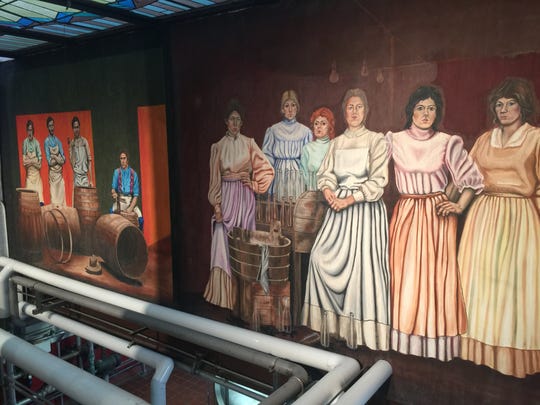 When you tour Yuengling, you'll get a bit of history. (Photo: Submitted)

Yuengling is the oldest brewery in the United States, so it's no surprise that the most fascinating aspect of the Yuengling brewery tour is its history.

After a short introduction outside the company store, the tour begins at hand-dug caves that date back to the early 1800s. The tour guide explains how their beer was brewed and then stored in kegs. As you move through the factory, you come forward in history. The tour encompasses the brewery's origin, Prohibition, generations of the Yuengling family, and the brewery's expansion to Mill Creek and Tampa, Florida.

The tour ends at a bar that's attached to the gift shop. The dark wood of the bar is charming, and lends an antique quality to an otherwise barren room. Each tour patron can choose two samples of a variety of Yuengling beer, including the flagship beer, Yuengling Traditional Lager.

Because the brewery was originally built in 1831, be prepared to climb approximately 120 steps. Also, the brewery is not handicapped accessible. Parking is available on the street, which is very steep.

Brewery tours are offered every day except Sunday at 420 Mahantongo St., Pottsville. Check their website for times.

One of the reasons the Heavy Seas brewery tour is fun is because of its pirate theme. The Heavy Seas logo, which sports a skull in a pirate cap, is beautifully painted on the outside of the brewery. The food truck is named Pieces of Eight, another pirate reference. Inside, you can snap a photo of yourself disguised as a pirate.

Heavy Seas Beer has its roots in Maryland's first brewpub, Sisson's, which began brewing beer in 1989. In 1994, owner Hugh Sisson founded Clipper City Brewing Co., which is the home of Heavy Seas Beer.

Heavy Seas reverses the usual brewery tour protocol by offering samples before your tour begins. Patrons can choose from a variety of beers on tap at the tiny bar that resides among the warehouse shelves. The "bartenders" are friendly and talkative, more so as the day wears on. (You can guess why!)

The tour guides are knowledgeable and cheerful, and loyal to Heavy Seas beer. The tour takes you through all the stages of the Heavy Seas brewing process, including the canning and bottling line. At that stage, I learned that cans are better than bottles for storing beer, because they block light, which "skunks" beer. Cans are also easier to recycle than bottles.

Be sure to stop at the Heavy Seas Tap Room before heading home. The Tap Room is charming, with warm wood accents and more pirate-themed décor.

Tours are free, but for $5 you receive a souvenir pint glass and four beer samples. Tours are offered Saturdays and Sundays at 4615 Hollins Ferry Rd., Halethorpe, MD. Registering for tours on their website is highly recommended, because they fill up quickly. 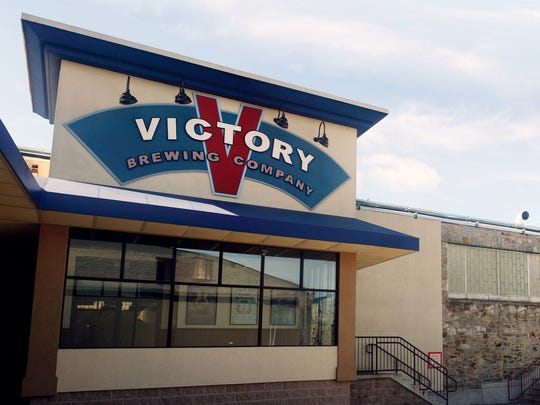 Victory Brewing Co.  brews most of its beer in its new facility in Parkesburg, but the original brewery is located in Downingtown, nearly hidden in an industrial park. New recipes are tested at the Downingtown brewery, which also produces seasonal beers.

Victory was founded in 1996. Since then, the restaurant, which has a 70-foot bar, has doubled in size. The restaurant is cozy, with lots of wood and copper décor.

The tour begins just off the restaurant. The tour is full of jokes and fun, as well as helpful information for home brewers. It includes a trip through the entire brewing process, from the HopVic, that allows for whole-flower hopping, to the refrigerated room where the hops are stored. Along the way you can smell and sample malted barley and fresh hops.

Speaking of samples, there are none included with the tour. The bar and retail store are nearby, if you want to purchase drinks.

Brewery tours are offered every Friday, Saturday and Sunday at 420 Acorn Ln., Downingtown. Check their website for times.

If you want to drink the freshest beer you'll ever have in your life, take a trip to Frederick, Maryland for the tour at Flying Dog Brewery. You'll sample beer at every stage of the brewing process, including the end of fermentation, when fresh beer is drawn off for you to drink. The tour guide is very knowledgeable, so feel free to ask as many questions as you like.

Flying Dog was originally founded in 1990 in Aspen, Colorado, then moved to Denver. In 2007, Flying Dog closed its Colorado brewery and began brewing exclusively in Maryland.

The brewpub is a lot of fun, with Flying Dog's fascinating logos and artwork covering the walls. The bar is big, with special batch beers on tap and in casks. Be sure to order a seasonal flight and food pairing.

Brewery tours are offered most Thursdays, Fridays, Saturdays and Sundays at 4607 Wedgewood Blvd., Frederick, Md. Registering for a tour on their website is highly recommended, as they fill up fast. 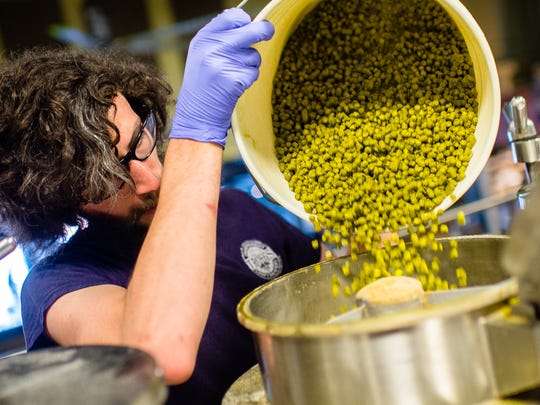 Troegs Brewery tops our list of brewery tours in the region. (Photo: Submitted)

Tröegs takes safety very seriously, so safety glasses were handed all around. If you aren't wearing closed-toe shoes, they also have a variety of Crocs you can wear.

The tour takes you through each stage of the brewing process. Along the way, you're able to look into vats to see what's boiling or what's fermenting. Our tour guide showed us different kinds of hops, and let us smell and taste barley that had been roasted for varying lengths of time.

Toward the end of the tour, Tröegs has a miniature bar that resides in the factory. There, the tour guide serves up several small cups for you to sample.

The Tröegs Brewery tour tops this list because of its professionalism and the generous amount of samples. Be sure to stop in the snack bar after the tour, where you can drink from their Scratch Beer Series. The menu has a variety of upscale and down-to-earth food, including a delicious brisket sandwich and a cast iron chicken and pheasant pie.

If you are unable to take the Guided Tasting Tour for $5, which includes the samples and a souvenir pint glass, Tröegs offers a free self-guided tour, as  well.

Brewery tours are offered every day at 200 E. Hersheypark Dr., Hershey. Check their website for times.