Javier Bardem debuts his ghostly villain Captain Salazar in the first teaser for 'Pirates of the Caribbean: Dead Men Tell No Tales.'

What we do get an eyeful of, however, is the villain of the fifth Pirates film. Captain Salazar, played by Javier Bardem, is a terrifying figure who leads a ghost group of buccaneers out of the Devil's Triangle aiming to take out Sparrow and collect the bounty on our strange hero's head. (It's only 200 pounds, which probably went farther back in the day.)

At least the creepy Salazar is a polite sort as he's spitting up what looks to be ghost blood. When he and his minions take the ship with force and run into young Henry (Brenton Thwaites), he tells the kid, "Find Sparrow for me and relay a message from Capitan Salazar and tell him: Death comes straight for him. Would you say that to him, please?" 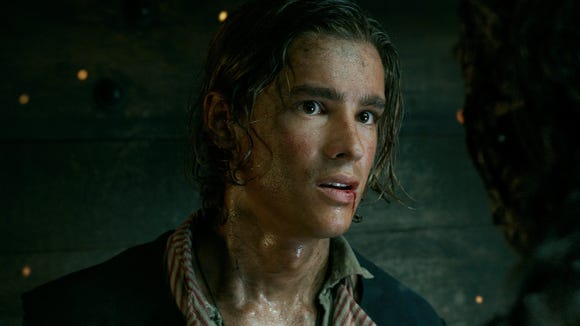 Like most people, Henry (Brenton Thwaites) is freaked out when he meets a deadly ghost pirate. (Photo: Disney)

It nicely ends on a creepy note, with a bunch of haunting kid voices doing the familiar "A pirate's life for me" refrain.

Depp is back in the new Pirates, as is Orlando Bloom as Will Turner, captain of the Flying Dutchman, and Geoffrey Rush as Captain Barbossa. Among the new crew is fresh face Kaya Scodelario as astronomer Carina Smyth, who like Sparrow seeks the true treasure of Dead Men, the mythic and powerful Trident of Poseidon. 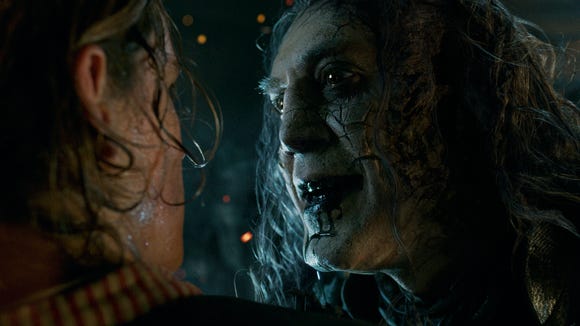